It’s almost the end of the work week, close to Friday but not there yet…so what better to talk about then who we are following on Twitter?

@HealthyHomeBook– The Healthy Home (March 2011) focuses on the most important environment—the home—and reveals surprising health risks posed by our everyday products and habits.

@thisbigcity– Tweets about architecture, urban design, technology, transport and the bicycle from founder of the award-winning sustainable cities blog This Big City

@FOXBaltimore– With over 7 hours of Emmy Award winning news coverage every weekday, FOX45 is consistently Baltimore’s most honored news operation.

Laughs…to get through Hump Day

A young accountant spends a week at his new office with the retiring accountant he is replacing. Each and every morning as the more experienced accountant begins the day, he opens his desk drawer, takes out a worn envelope, removes a yellowing sheet of paper, reads it, nods his head, looks around the room with renewed vigor, returns the envelope to the drawer, and then begins his day’s work.

After he retires, the new accountant can hardly wait to read for himself the message contained in the envelope in the drawer, particularly since he feels so inadequate in replacing the far wiser and more highly esteemed accountant. Surely, he thinks to himself, it must contain the great secret to his success, a wondrous treasure of inspiration and motivation. His fingers tremble anxiously as he removes the mysterious envelope from the drawer and reads the following message:

A man was given the job of painting the white lines down the middle of a highway. On his first day he painted six miles; the next day three miles; the following day less than a mile. When the foreman asked the man why he kept painting less each day, he replied “I just can’t do any better. Each day I keep getting farther away from the paint can.”

An architect is someone who makes beautiful models, but unaffordable realities.

A salesman was demonstrating unbreakable combs in a department store. He was impressing the people who stopped by to look by putting the comb through all sorts of torture and stress.

Finally to impress even the skeptics in the crowd, he bent the comb completely in half, and it snapped with a loud crack. Without missing a beat, he bravely held up both halves of the ‘unbreakable’ comb for everyone to see and said, “And this, ladies and gentlemen, is what an unbreakable comb looks like on the inside.”

Enjoy the rest of your week!

Twitter is a great way to get involved and improve visits to your website. @prevostconstruc follows new accounts on a daily basis and love to share our new favorite’s to follow. We are always looking to find an account that is construction  based, and full of knowledge, especially about green products and innovations. 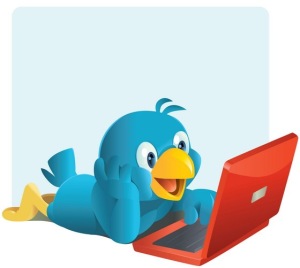 Here are a few worth following:

@HGTVpro: As a sister network to HGTV, we’re the site for professional homebuilding and remodeling — as well as energy-efficiency and green building best practice

@CoTweet: CoTweet – How Business Gets Social

@WomenInConcrete: Women in Concrete is a networking resource for women working in the concrete construction field. Learn about the people, industry trends and techniques

@RemodelQA: RemodelQA, where contractors and experts share their expertise to your home improvement and remodeling questions

This entry was posted in Uncategorized and tagged Go Green, Social Networking, Twitter.

Twitter is one of the most popular social networking sites out there today, and we @prevostconstruc love getting construction updates. It’s a great way to receive information fast on current events! So, who does @prevostconstruc follow exactly? 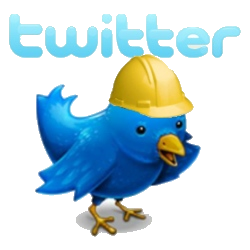 A few jokes to get you through your day:

How many LEED Accredited Professionals does it take to change a light bulb?
Four—one to tell you how to earn LEED points by changing it, one to change it, one to document the change, and one to deliver the check to the U.S. Green Building Council for certifying the change.

How many lighting designers does it take to change a light bulb?
Uh… “light bulb”? That’s a lamp, what you are calling a “socket” is a luminaire, and I think you’d get better efficacy if you changed the ballast instead.

Contractor – A gambler who never gets to shuffle, cut or deal

What made the column feel it had to conform?  Pier pressure.

What does a cabinet manufacturer sing when he’s trying to solve a design problem?
Consider your shelf, my friend.
Why did the architect’s lack of money mean he couldn’t move a column?
Because he couldn’t budge it. 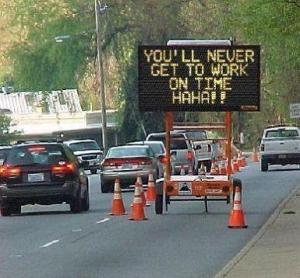 A carpenter was fixing the roof of a church, when he struck his thumb.

“Dammit, I missed!” cries the carpenter. The minister corrects him, saying, “You shouldn’t say such a thing in the church.”

The carpenter continues his work, and soon strikes his thumb again. “Dammit, I missed!” he yells. The minister again corrects the carpenter.” When the minister corrects him this time, the carpenter asks, “What’s going to happpen? A bolt of lightening going to strike me dead?” The minister says, “As a matter of fact, yes it will.”

Suddenly a bolt of lightening comes through the roof, and strikes the minister dead. A large booming voice is heard saying, “Dammit, I missed!”

This entry was posted in Modular and tagged Construction Jokes, Social Networking.